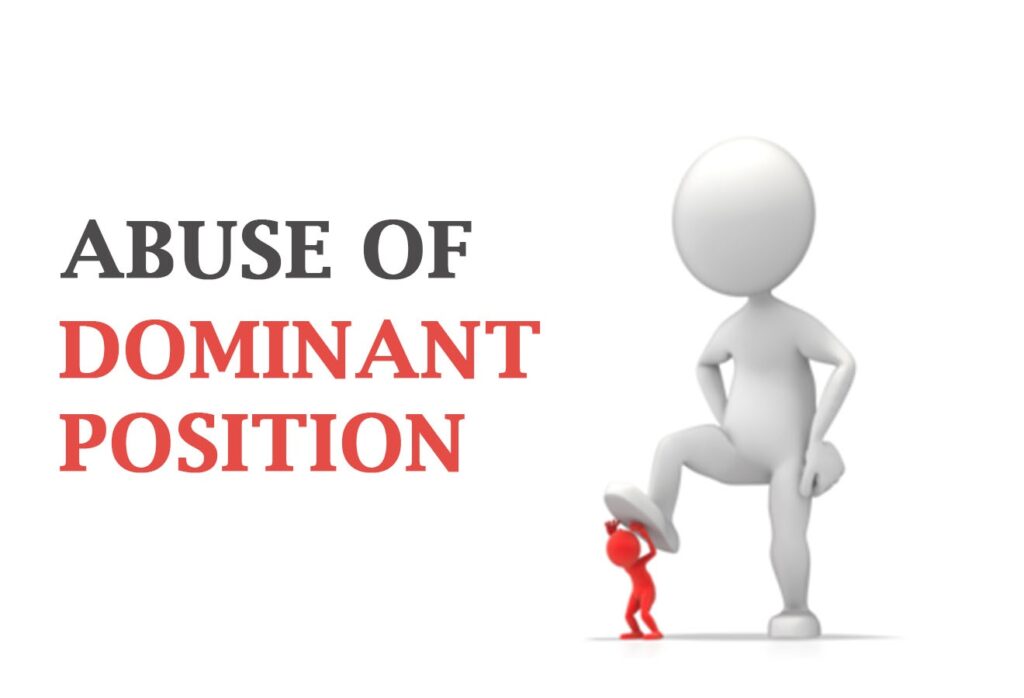 In the world, full of cut throat competition, where on one hand, new entrepreneurs are entering into the race with no back power, and on another hand, the already established renowned entrepreneurs are seen as an obstacle. This can be seen as the Whale and other small Fishes in the same ocean when compared to dominance at large.

The act is to provide for the economic progress of the state and forming the commission (an expert advisory panel) to prohibit practices that have unfavorable effects on competitiveness, to encourage and sustain competition in markets, to safeguard the interests of customers, and make sure freedom of trade and commerce carried on by different participants in markets, in India, and for matters connected to that or incidental to it. The Competition Act came into force from 1st September 2009.

The concept of Dominance is not something new, but a concept from ancient times. As and when the market system worked successfully, dominance was witnessed. Dominance is referred to as the ‘measure of the strength earned within the market by using their name, brand, products, or service’. It is a “Market Value” of any particular business/ trading entity. It means that it is of ‘more value or superior’ than others. Dominance controls market conditions and consumers. But ‘dominance in itself is not an abuse, but the abuse of dominance is an abuse.’ Starting with the License Raj/ Permit Raj system to Competition Commission of India modified laws the term dominance has never been left out of perception.

Monopoly is a market condition where there is a sole seller in the market selling his unique product. In a monopoly structure, the seller is free to carry on his business activities the way he wants & sell at the price he decides. Dominance is a situation where there are many sellers in the market selling alike products but the major selling entity governs the market. The basic important distinction lies in the position of the seller. It means in monopoly there is any other driving force to change the market conditions due to no competition and in Dominance due to huge competition, the single or group of business entities control the market as they have earned a reputation, brand, products or services with lots of consumers. Monopoly does not restrict other competitors from being the single one, whereas dominance restricts the other in some ways which will be discussed below.

Section four of the Act[2], prevents any economic entity or cluster from misusing its influential position.

The Competition Act focuses to provide and develop a healthy and sound environment for fair trading. It aims to protect consumers and other enterprises. The Act has developed the Competition Commission of India (CCI) for the above-stated purpose.

Section 4 (2) (a) of the Competition Act of 2002 defines dominant position as, [4]“dominant position” means a position of strength, enjoyed by an entity, in the relevant market, in India, that allows to –

FACTORS DETERMINING THE POSITION AS A ‘DOMINANT’

Dominance is the superiority or some extra power that can be used to influence the market and consumers at large. It is a position where that position indirectly controls the market. Following are some factors which have a part to decide the dominant position; –

The other important factors are RELEVANT MARKET CONDITIONS and RELEVANT GEOGRAPHIC MARKET, where the relevant economic market conditions and the geographical conditions are looked upon.

The ‘relevant market’ is defined under the Act. “Section 2 (r) defines as the market that is determined by the relevant geographic market and relevant product market.”

Further, the relevant product market means the market of interchangeable goods in terms of prices, characteristics, uses, etc. under section 19 (7) of the Act. Relevant geographic market elaborates the factors determining the geographic conditions under section 19 (6). This means consumer preferences, use of goods and services, prices, other available products.

The Competition Act avails the remedies laid down under section 27 of the Act, 2002.  It goes with the procedure followed by the Commission starting with:

ABUSE OF DOMINANCE IN COMPARISON WITH OTHER GLOBAL COMPETITION LAWS

The dominance and its mal use are of no recent origin, but ancient origins of humankind all over the world. The abuse of dominance is majorly or mostly used for exploiting the weaker section of consumers and other emerging entities.

India[7]: India has its roots from the British period i.e. from 1600 establishment of the East India Company to the current law in action i.e. Competition Act, 2002. The era had been full of exploration with no or much fewer laws as it was an emerging period on the globe. Not going in deep, as stated earlier British India had a “license raj system”. After Independence, in free India, as and when needed the laws were made. For instance, The Monopolies and Restrictive Trade Practices Act (MRTP) was adopted in 1969. The MRTP Act was the first law in India to control and regulate the economy and competition in the country. The Consumer Protection Act also tried to protect consumers but didn’t prove that fruitful due to numerous cases all over the country.

The Industrial Department and Regulation Act, 1951 (IDRA) empowered the functioning and regulating majorly the private sector. In the era when vital or economic industries were controlled by the State Government, the private sector was difficult even to enter. Thus, the public sector or state-controlled industries were the sources of economic development and economic growth. Till the New Economic Policy and reforms, it was the government policies that were obstacles.

The MRTP Act regulated monopolies, which also gave some directions towards the DPSP in the Constitution of India. The amendments in 1984, 1991 dealt with the adding of Unfair Trade Practices and eliminating the chapters of Mergers and Acquisitions respectively.

The Economic Reforms Laws in 1991, was a revolution in India. It brought Globalization, Privatization, and Globalization permitted international trades and economies to participate which boosted the Indian economy to run. But with these, the clashes of laws also started which in turn exploited the nations. The new law was in need to repeal the MRTP act, eliminating reserved products, privatize the shares and assets and to bring private as well as public industries led to the drafting of a new, modified COMPETITION LAWS in India with forming the COMPETITION COMMISSION OF INDIA in 2002. The advisory panel, Competition Commission of India (CCI) to work as an administrative body, and The Competition Appellate Tribunal (COMPAT) to function adjudicatory.

The United States of America: It can be traced back from the history of the United States that the first modern statute regarding the Competition Law was Sherman Act, 1890[8] and the Clayton Act, 1914.

The Sherman Antitrust Act of the US outlawed the merging of the entities to form into a monopoly to regulate the particular market. The object of this act was to encourage a fair economy and competition. This act outlawed conspiracies, monopolies, and such practices within the industries.

Even the other European countries, Germany,Canada have their modified laws. Moreover, the base of these laws is to have a sound feasible economic environment, safeguard consumers, and protect the emerging or small economic entities from exploitation.

The above discussion makes it clear that the Competition laws are of the utmost importance in a country like India. However, economic reforms transformed the world into a global market. But the fairness and promoting a healthy economic environment is an effort made by nations all around.

Abuse of Dominance: A Comparative Perspective